The Value of Play

When children are playing, it certainly looks like they’re having a lot of fun, but they are also learning and developing important skills. As Leo Busclagia said, “It is paradoxical that many educators and parents still differentiate between a time for learning and a time for play without seeing the vital connection between them.”

Play provides opportunities for children to apply their knowledge of the world around them. They wonder, explore, question, create, discover, and take risks. Let’s look at a concrete example of the skill-building that occurs through play: 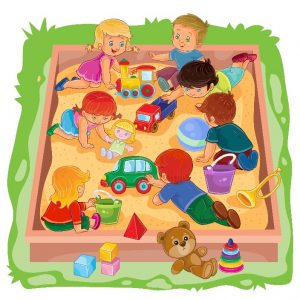 When you watch a group of children at the playground, it may appear that they are simply digging in the sandbox, going down the slide, and hanging from the monkey bars. Upon closer examination, however, you’ll see many other important skills emerging. For example, the children in the sandbox are developing social skills, as they take turns using pails and shovels. They’re learning about patience and sharing as they wait for their turn with the biggest dump truck. The children are introduced to compromising as they evaluate each other’s ideas about what to build next. Perhaps they are even learning how to resolve conflicts when presented with opposing views.

Behind the buildings, roads, and tunnels the children have made in the sand is a whole story they’ve created, with each child playing a specific role. Their pretend play is allowing them to stretch their imaginations as they incorporate new ideas into the scenarios they have developed. There are motor skills in use as the children dig, mold, pour, and rake. There is also problem-solving in their play, from figuring out how to get the sticks for the fence to stand up in the sand, to how to incorporate another child into the activity who has just arrived.

Through these interactions the children are developing their communication skills. They are expressing opinions, asking each other questions, and sharing ideas. Through their play they begin expanding their vocabulary, using words like “excavator” and “bulldozer.”

The other aspect of language that is occurring, although we can’t hear it, is the children’s self-talk. The messages in their private speech support their self-regulation. They are making the transition from external regulation, through forms such as adult’s prompting or instructions, to self-regulation, where they direct their own behavior.

When an educator adopts an inqui

ry stance while children are engaged in play, he takes on the role of questioning and wondering alongside the children. He capitalizes on their natural sense of curiosity to promote their learning. The educator can think aloud, “I wonder what would happen if…” or “I wonder why…” or “Do you think we could…?” These rich prompts and questions promote further investigation and experimenting that lead to authentic learning opportunities through discovery.

It’s a misconception that learning happens apart from play. Using our example of the children in the sandbox we can see that rich learning occurs as children interact with their environment and with each other through their play. What if we could add more imaginative play to fundamental skills like cutting and writing? Fortunately, with Noggins, we can. Scissors and writing tools like pencils and markers come to life as characters in children’s imaginations. Through playing with their Noggins, children develop their fine and visual motor skills, all while engaging in pretend play. As Fred Rogers said, “Play gives children a chance to practice what they are learning.”

Brought to you by: NOGGINSLAND