How Young is Too Young for Screen Time 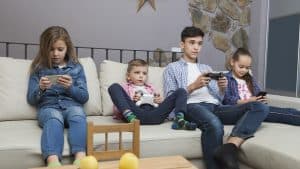 It doesn’t matter where I am, I constantly see small children glued to some type of device. And when I say glued, I mean glued. An earthquake could happen and they wouldn’t even flinch from their screens. It seems like kids can’t bear to live without their screen time and, like it or not, this is the world we now live in. And as more and more devices are developed, kids seem to be owning their own devices younger and younger.

That begs the question, how young is too young for screen time?

According to the American Academy of Pediatrics, screen time rules should go like this:

Despite these “rules”, many kids are getting more screen time than what’s recommended. Stats show that kids ages 0 to 8 tripled their screen time from 15 minutes a day to 48 minutes a day between 2013 and 2017. Along those same lines, Common Sense Media found that 59 percent of parents admit that their kids are addicted to their screens.

Not only is screen time consuming children’s lives, it’s also having an effect on their writing and language skills. Studies are showing that more and more Kindergarteners are going to school without the motor skills needed to write. This is being traced back to their excessive use of touchscreen devices. Furthermore, studies are showing that children who use smartphones are showing language delays.

Remind me again why we’re letting our children live on their screens? No one is saying kids can’t use devices. It’s just a case of ‘everything in moderation’. 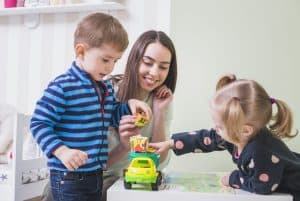 As the mother of two, I allow my children to have screens, but with limits. When the time is up, it’s up. Period. Devices go away and life as we know it goes on. Things like playing, socializing, reading, arts and crafts, etc. take up the rest of the their time.

It can be especially challenging to establish this new routine over the summer when kids often find themselves without a regular schedule and with plenty of downtime. If you’re worried about meltdowns and temper tantrums when you take away their beloved tablets and video games, rest assured it will be a phase and it will pass once you establish a new “normal”.

Try using a timer system. Have your child set a timer for 20 minutes. When they hear the timer ding, they know their screen time is up. Now they can find something else to do, like play a board game, go outside, or build a blanket fort in their room. Campaign for a Commercial-free Childhood has compiled a list of 70 simple and enjoyable screen-free activities for all ages. You may remember doing many of these things when you were a kid!

If you’re finding your child is spending too much time on their screen and it is affecting their motor skills, Noggins can help.
Noggins work to improve children’s fine motor skills when writing, drawing, and even using scissors. They’re innovative, creative, educational, and best of all they have nothing to do with a screen!

The next time your child reaches for a device, swap it out for some Noggins. Their teachers will thank you later! Your kids will too!