Back to School = Back to Making Lunches

There are a lot of things I love about back-to-school time: the return 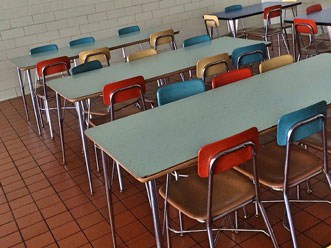 to routines, earlier bedtimes, and the promise of Fall around the corner, to name a few. One thing I must admit that I dread is – drumroll please – making lunches! I recently figured out that I have been taking lunches to school for over 35 years, first as a student, then as a teacher, and presently as an administrator. In addition to my own lunches, I have also been making lunches for my children over the past 8 years. And I have seen literally hundreds of kids’ lunches during my time working in schools. And so, I am going to share with you what I have learned to help make packing your children’s lunches at the least, a less painful experience.

Ask Them What They Want

This seems so simple but, really, I don’t know if my own parents had many discussions with me about what I wanted in my lunch. If we did, we might have talked about it once or twice then never really revisited the topic. With my own kids, there is open and regular discussion about what foods they would like me to pack in their lunches. Yes, we have ground rules. There has to be lots of healthy options and they can choose one treat. But they are never bound to having the same foods over and over. They know that if they wish to switch things up, they need to let me know before I grocery shop on the weekend and their new choices will be honored for Monday’s lunch.

I was a picky eater as a child. I have been blessed with my own picky eater now, which I’m sure is intended to let me experience my parents’ frustration firsthand. I have clear memories of beautiful sandwiches in my lunch that I absolutely did not want to 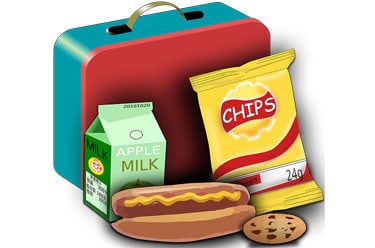 eat. I knew my parents wouldn’t be particularly thrilled if I didn’t eat my beautiful sandwiches so I started hiding them until I could safely stow them away in the garbage. Looking back, this was counterproductive on my part because when parents think you’re eating your sandwiches, they keep sending you more sandwiches!

The way I have approached this with my own kids is to make sure they know that if they don’t want something in their lunches, all they need to do is let me know. This doesn’t happen very often though because I’ve already asked them what they would like. Every now and then I do notice that they’re not eating their cucumbers or most of that croissant is coming home. Instead of instantly becoming frustrated, I just ask them what’s up. Sometimes I learn that they were rushed and didn’t have as much time to eat that day. Or a couple times they just haven’t been feeling that well and ate less. Those are issues we can work with.

Now, I’m not trying to paint a rosy picture of beautiful conversations with my children that always result in them eating their lunches. When my daughter was younger (she’s the picky one), I was met with a little resistance about eating lunch. At one point, our rule was that anything she didn’t finish at school, she had as her after school snack when she got home. Fortunately, this didn’t last long because I’m just as stubborn as she is and by about age 6, lunch battles became a thing of the past.

Think Outside the Box

School lunches don’t have to be a sandwich, some veggies, 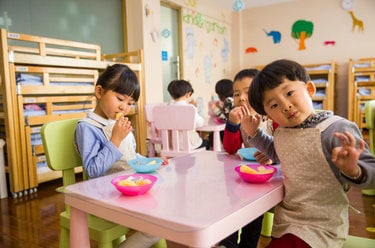 and a treat. My daughter has never taken a sandwich, although she did go through a phase where she requested plain bread in her lunch. My son occasionally eats sandwiches but he usually prefers other foods. During the phases when he does ask for sandwiches, he requests that they’re made on buns, croissants, or bagels. My daughter asked for wraps for a while and I had visions of chicken or turkey, cheese, lettuce, and other veggies. However, all she wanted were some cucumbers and mayo wrapped up in a tortilla shell. We can do that.

Most of the time, my kids eat what we have coined “snack lunches.” They have a variety of foods such as veggies and dip, cheese and crackers, applesauce, yogurt, mini bell peppers, rolled up deli meat, hard-boiled eggs, mini muffins, pasta salad, pretzels, and sliced up fruit. My son also loves to have leftovers from supper in his lunch, like pizza or ham. I see lots of students with thermoses in their lunches so they can eat hot foods like mac and cheese, soup, and pasta. The bottom line is, don’t feel like you have to be bound to traditional school lunch items. If you find foods your kids will eat and, even better, have some nutritional value, then go with it.

Sunday is our lunch prep day. We clean and cut up fruits and veggies, slice up cheese, and pour things like pretzels and crackers into little containers. In an hour, we can have lunch food prepped for the week for our family of four. I consider this ti 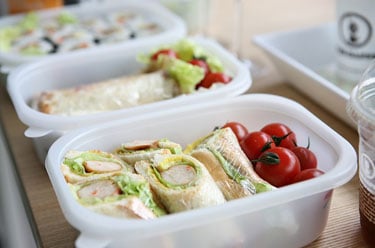 me very well spent because once the hustle and bustle of school, work, and after school activities starts, our motivation to pack lunches seriously dwindles. With the prep work already done, putting lunches together each night only takes a couple minutes.

When our kids started school, we got them into the routine of emptying their lunch bags as soon as they got home. When they were little, this meant that everything in the lunch bag came out and was set on the kitchen counter. Now that they’re older, they’re responsible for washing their containers, putting their freezer packs away, and disposing of any garbage. It only takes them ten minutes, it gives them some responsibility, and it frees me up from a task during the “get home, make supper, go to activities” rush.

I think the key to curbing lunch battles in our house has been our laid-back attitude. Tell me what you want, I’m open to possibilities, and let me know if you change your mind. As far as I know, there haven’t been any lunches hidden in the garbage, and that looks like success to me.