Right after “I’m bored,” the next most commonly used phrase in many households is, “I’m hungry.” This phrase frequently leaves my daughter’s lips and when I tell her to have a snack, almost inevitably her next words are, “Does it have to be healthy?” Sigh. And so begins the battle of health snacks. 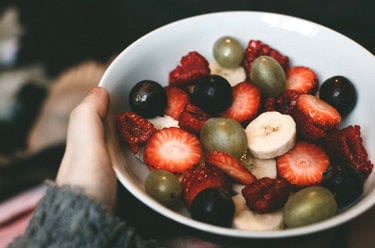 If left to her own devices, I’m quite sure my daughter would snack all day and never eat an actual meal. Consequently, we’ve had to reign in her snacking and keep it healthy so she’s not constantly eating junk food. Snacks can play an important role in managing kids’ hunger and boosting nutrition. Here are a few tricks of the trade I have learned when it comes to promoting healthy snacks for your kids:

1. Fruits and veggies that are sliced and within reach are somehow more appealing than their original form counterparts in the fridge. For example, if I slice an apple, both my children are highly likely to begin eating it. They enjoy it so much in fact, that I usually end up slicing a second apple to head off the argument over who gets the last piece. Ditto for things like celery, carrots, and cucumbers. I don’t receive many requests for veggies but if I have them washed, cut, and within their sight lines, my kids begin nibbling on them. My daughter even recently started asking me to slice up bananas. This same trick works for hard-boiled eggs too. Apparently cutting things just makes them better.

2. If you want to make the fruits and veggies even more appealing, 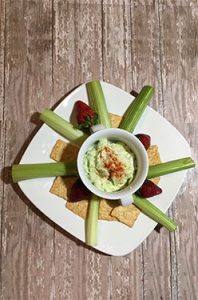 think about what you can spread on them or dip them in. Add some peanut butter to those apple slices and it’s a whole new ball game. Ditto for celery. Ever heard of ants on a log? Throw some peanut butter on a celery stick, press in some raisins, and bingo, you’ve just taken celery to a whole new level. I have also found success with setting out ranch dressing or hummus alongside veggies. Hummus also works nicely for dipping pretzels.

3. Presentation can be a major motivator for kids. I first realized this when we would be at an event like a birthday party and I would see my children eating things off fruit and veggie trays. Since then, I have started arranging little platters for them and often do this when they have friends over. In addition to fruits and veggies, I use foods like cheese and crackers, raisins, pretzels, mini bell peppers (cut into pieces of course) and tortilla chips with salsa. Somehow putting these foods on a divided tray or plate makes them more enticing. And if you really want to knock the kids’ socks off, take those foods and stick them on a skewer! 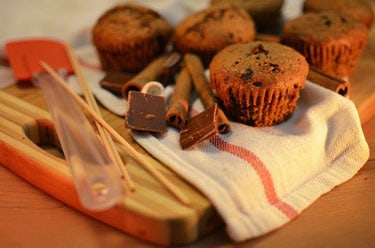 4. Try baking some healthy desserts. I make mini chocolate chip muffins that my son loves. They’re not the perfect option but they are gluten-free and sweetened with applesauce and real maple syrup, which puts them head and shoulders above store-bought options. I also make protein bars that you would never believe are made with healthy ingredients, and they’re gobbled up within a couple days. I’ve made healthier versions of cookies, carrot cake, and lemon loaf. Don’t get me wrong, for every recipe I’ve had success with, there’s been another one that looked good in the pictures but was an epic fail. The few tried and true recipes I’ve discovered though have been big hits with everyone in the family, including the kids.

5. Lastly, if you want your kids to make healthy choices with their snacks, make sure that’s what you have available to them and that’s what you’re modeling. If your pantry is filled with junk food, it’s going to be tricky to make grapes look appealing. And if you’re always reaching for the bag of chips yourself, getting your kids to eat carrots instead will be an uphill battle. We have treats in the house and we definitely partake in outings to the ice cream store, but overall we strive for balance.

Snacking is important for children because their smaller stomachs fill up fast and they burn energy quickly. And we all know it’s practically a miracle if we can make it through a day without our child begging for a snack. Promoting healthy snacks can be done in a fun and appealing way and will help set your kids up for an overall healthy lifestyle.