Can Cursive Make a Comeback?

When you become a parent you sometimes 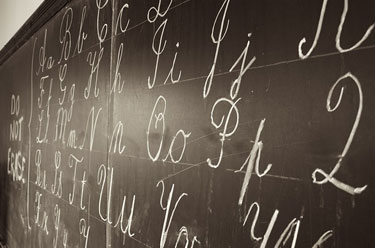 realize that things that didn’t bother you as a child, suddenly do. For me, one of those things is the fact that cursive writing has essentially been kicked to the curb in schools across the country.

When I was growing up (now I sound like my mother!) we were taught how to write in cursive; that included developing our own signature, which comes in handy on a daily basis as an adult. Fast forward a few decades and many kids these days look at cursive writing as if it was hieroglyphics. Cue the eye roll! This is mainly due to the fact that cursive handwriting is no longer required to be taught in schools across the country.

Ever since Common Core standards moved in, cursive writing has moved out. The good old “core” doesn’t require teachers to teach this now ancient form of handwriting.

If you do the research, you’ll discover that technology basically bumped cursive. The education community had to decide where to spend the time in the classroom and technology took priority. Teaching this beautiful style of handwriting with all of its loops and curves is time-consuming, no doubt. The powers that be decided that instructional time should be spent on other things, like helping our children compete technologically. I guess it doesn’t matter if they can sign their name because they’ll be able to type it in electronically!

But, not everybody is ready to put the kibosh on cursive. There are about a dozen states that have added it back into the curriculum. For example, in Louisiana it is now mandatory that students from grades 3 to 12 get cursive instruction each and every year! 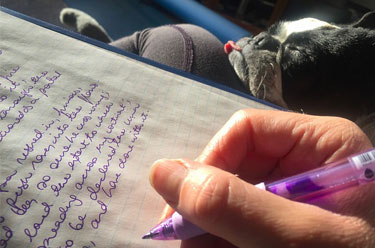 Why is there a cursive crusade going on in parts of the country? It’s because there are many benefits (besides being able to sign your name) to learning this “connected” style of handwriting. Cursive helps to develop motor skills that are not used in basic printing. It forces people to use their hand muscles and brains in different ways.

Cursive writing has also been known to help children with dyslexia. It’s actually used as a form of therapy as it helps students with decoding processes (the ability to match letters to sounds and then use that skill to read words accurately and fluently). This flowing style of writing uses hand-eye coordination as well as other brain and memory functions that printing does not.

Seeing that there are tangible benefits for teaching cursive writing makes it even more disappointing that it is no longer required in many schools.

What’s a cursive-loving parent to do?

If it’s important to you that your child learns how to sign his or her name on a check or legal document then it’s time to practice those curly q’s right at the kitchen table. Take matters into your own hands and start the teaching at home! I’ve started to do that with my girls, ages 9 and 6. Surprisingly enough they still sell workbooks with cursive letters.

Another idea is to use a dry-erase board. I write my daughter’s names in script, have them trace it with me and then practice it on their own. It’s a work in progress, but it’s better than nothing!

I truly wish they would bring this beautiful style of penmanship back into the classroom, but I’m also a realist who knows the cursive canoe has sailed far off into the sunset. It has been replaced with a technology tanker that shows no sign of sinking.