What’s Up with This New-Fangled Math?

You’re trying hard to help your child with his math homework but all you hear is, “You’re doing it wrong!” Up until this point, your math skills had served you quite well in life. Now, all the sudden, your child’s second grade math questions have got you feeling a little inept. You’re also starting to question whether this “new way” of doing math is really teaching your child anything. After all, learning the basics with a pencil and paper certainly didn’t harm you and in fact, had you feeling pretty confident in your math skills…until now.

Let’s get a common misconception out of the way. We haven’t thrown all “traditional” math to the wayside. 5+5 is still 10 and 9×3 is still 27. We also know that it’s really handy in life if you can rattle off those answers automatically. 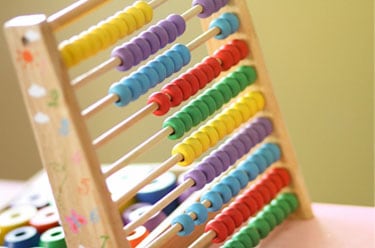 What we also know though, is that rote memorization of facts and formulas doesn’t always equate to understanding mathematical concepts. And without that understanding, as students progress through the grades, we see struggles begin. It’s great to know that length times width will give you the perimeter of a rectangle but without any understanding of why, we’re just barely scraping the surface of this concept in measurement. And if I use multiplication but my peer uses addition and we both arrive at the same answer, is one of us wrong? Of course not. We can talk about the most efficient strategy to arrive at an answer while still honoring the different ways children think.

Speaking of which, imagine being nervous about your math skills and scared to participate in class for fear of getting the answer wrong. This is a real scenario we often see in classrooms. Now imagine a place where it’s okay to make mistakes, it’s fine to use different ways to find answers, and where your thinking is acknowledged and not simply dismissed. This is a great recipe for easing the mathphobia educators see. It doesn’t mean that we’re letting incorrect answers go. It means that we’re ready to delve into a student’s thinking. Just because the bottom line is wrong doesn’t mean the whole process the student used was incorrect. Isn’t it better to look at her thinking and see where she got off track then to simply put a big red “X” by her final answer and move on? Good teachers meet students where they’re at. We can’t determine where they’re at in their learning if we don’t know what they’re thinking.

This “new math” is also promoting mental math. It’s difficult for me to come up with any reason why being able to do calculations in your head is a bad thing. Let’s take the example of 563+249. “Mental math” for some may look like visualizing that question in your head, the first number on top of the second, then adding the digits together, starting with the column on the right. When you get into “carry the one” you try not to get messed up and continue along the columns. It gets a little messy. With a solid understanding of place value and concepts like “friendly numbers” (249 is very close to 250, which is easier to work with), kids can figure out questions like this in seconds. Seriously. They’re not pulling out a calculator. They have also been taught about the reasonableness of answers, so if their misguided friend says the answer is “752,” they can explain exactly why that’s not even possible.

Along with being able to explore children’s thinking, discussing different ways of arriving at answers, and teaching them how to do calculations in their head, many of today’s math classrooms include the use of manipulatives. These are things like rekenreks, ten frames, teddy bear counters, and snap cubes. If you don’t know what they are, that’s okay. Your child can fill you in. What we’re doing with these tools is using them to help children understand math. Think of a toddler who can count to ten. It’s great that he’s memorized those numbers but he has no idea what any of them represent. As he ages, we want to teach him what the concept of “5” really means. We want him to know that it’s larger than 2, it falls in between 4 and 6, it’s two skips away from 7, and if we double it, we get ten. Manipulatives help us show him these concepts. He can make a train of ten snap cubes or count out ten teddy bear counters. Then we can start manipulating them so he sees what numbers like “five” really mean. We’re shooting for understanding, not just memorization.