Are You That Parent? Profiles of Parent Sports Fans

I’ve spent many hours watching my children and their teammates playing sports, including baseball, football, hockey, and soccer. Sometimes I must admit, the action in the stands is almost as exciting as the game itself. Here are some of the more entertaining parent profiles I have observed over the years:

Super Fan has a team hoodie, team jacket, team hat, and even a blanket to sit on that’s embroidered with the team name. Her bag, which is in the team’s colors, says “Soccer Mom” on the side. She may carry some type of noisemaker, such as a cowbell, which she enthusiastically shakes during exciting points in the game, or perhaps just randomly. Super Fan may stand at times to get a better view of the action. For this reason, you will not want to sit behind her. But, you will also not want to sit in front of Super Fan, in order to avoid the cowbell in your ear. It’s best to sit alongside Super Fan, but a safe distance away.

Your child’s sports team may not have a professional commentator but you may very well have an amateur, self-appointed one in the stands. If you want to watch the game with your eyes closed, sit near The Commentator, who will keep you apprised of every second of the action. As a bonus, The Commentator will even add in her own opinions as she runs her play-by-play. Committed to the job, The Commentator won’t slow down, even if she has no idea what she’s talking about.

He may not have volunteered to help coach but he’s made it a full-time job up in the stands. If you want to hear, “Why in the world would they do that?” and “”That’s not how to do it!” then you should cozy up to The Coach. Although he hasn’t run a practice and has no idea what’s going on behind the scenes, he is all-knowing and oh-so-willing to share his knowledge. His own child is easy to pick out; she’s the one who keeps missing the ball because she’s distracted by her dad yelling out instructions to her from the sidelines.

Shy Guy wants nothing more than to watch his child play, greet her with a smile after the game, then maybe go for some ice cream. He’s the parent who realizes his kid isn’t drawing a paycheck from playing 6-year old girls’ soccer. Shy Guy sits away from the herd and hopes that Super Fan, The Commentator, The Coach, and Angry-by-Default Parent don’t come too close. He cringes with every ring of the cowbell and every yell at the referee. Shy Guy is easily recognized because he’s the one mouthing, “I’m sorry” to the other team’s fans. 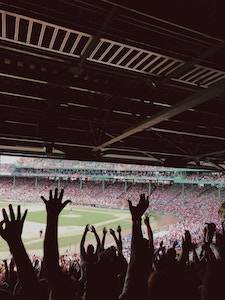