Is Your Child A Righty, A Lefty, Or Ambidextrous? 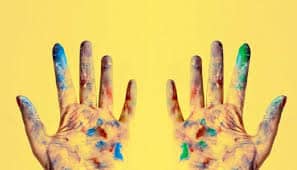 By the time they begin preschool, many children are already beginning to show a hand preference. Even as an infant, you may have noticed that your child has a clear preference for either their right or left hand once they began picking up toys, utensils, or food. And by 5 years of age, when most children are entering kindergarten, it’s usually apparent that they are a righty or a lefty.

But what if your school-aged child doesn’t show a preferred hand? There is a slight chance your child could be ambidextrous or mixed-handed. Ambidexterity is the ability to use both the right and left hand equally well for the same tasks, like writing or throwing a ball. Mixed-handedness is when a person may use different hands for different tasks. For example, some people can write well with their left hand and throw a ball with their right hand. Ambidexterity and mixed-handedness are extremely rare, with only 1% of the population falling in this category.

How can you tell if your child is ambidextrous?

It is unknown what exact factors contribute to hand dominance, but it is widely accepted to be an inherited genetic trait. Some research points to a relationship between dominance of the brain hemispheres and handedness as well as other environmental factors. For example, naturally left-handed children may see their right-handed parents or peers and try to mimic them, becoming somewhat proficient with both hands.

But suppose your child has begun kindergarten, and they still don’t seem to show a dominant hand. In that case, their teacher and their school’s occupational therapist will likely begin working with them to determine their handedness. They may observe your child during class to see which hand they use first for writing or reach. Some children without a preferred hand may switch hands often when writing and drawing because their hand tires easily, which could be a sign that the muscles in their hands are weak.

It can be challenging for your child’s teacher to determine if they are ambidextrous or just need to work on their fine motor skills. It’s kind of a chicken-or-egg situation. You may wonder if their hand muscles are weak because they don’t have a preferred hand or if they don’t show a hand preference because their hand muscles are weak in both hands.

If your child truly is ambidextrous, they may have to overcome some other obstacles as they begin school, including:

How can you help your ambidextrous child?

It’s important for your child to develop hand control as they enter elementary school. Hand control promotes not only their independence but also their learning ability. Of course, if your child can use both hands comfortably, there is no reason to be concerned. But if they are struggling to efficiently complete tasks such as writing or cutting, you may need to work with them to strengthen their hand control.

Here are a few things you can do to help your child: